Any reputed Travel Agency in Kanpur faces variety of customers. A travel agency which has an established and reputed business should be able to meet all your corporate travel requirements. Check out the following two common scenarios for Corporate Airport Transfers that travel agencies need to cater to.

Arrival of Large Corporate Groups Together

If your travel plan calls for a group of co-workers travelling and arriving together at the same time, you would need large transportation vehicles like 45-seater luxury bus. For an even larger group, consider bigger coach buses that have a capacity of 56 passengers or more. Moreover, you can look for Tempo Travellers in Kanpur equipped with luxury amenities and modern features too.

Before tempo traveller booking or even Car Booking in Kanpur, it is essential to discuss the luggage accommodation with your transportation provider. In case your group has too much luggage to accommodate, make sure you let your travel agency know in advance.

If you have separate timings for different groups of travellers and if juggling through each schedule is giving you a tough time, Shanker Travels have some good news for you. To make your travelling experience more comfortable and stress-free, we have brought exceptional logistics support for large teams.

Car Hire in Kanpur through Shanker Travels is easy and convenient as our team of experts takes care of all the arrangements smoothly and work out strategic plans to make our travel experience easy like a breeze. We provide customized trip according to your needs in addition to determining proper timing, vehicle loads, routing and traffic management. The team of Shanker Travels also punctually tracks the flight arrival and adjusts the pick-up or drop-off schedules during flight delays.

The management of air transportation itinerary for big groups can be quite a tough job, but with competent professional experts like Shanker Travels, you can relax in peace.

Whether you hire a Tempo Traveller in Kanpur or need to accommodate a large group of travellers in a Volvo, you can contact the transport logistics of Shanker Travels who would take care of all your transportation needs.

If you need any help with any air travel requirements or face any issues related to the travel delays or weather challenges, you can leave the troubles associated with it to our expert managers at Shanker travels to take care of your corporate airport transfers.

ShankerTravels provides reliable and smooth airport transportation to all major destinations. Be it a single corporate traveller or large groups, we specialize in executive ground transportation and logistics.

How Would You Pick the Right Bus Services Company in Lucknow ? 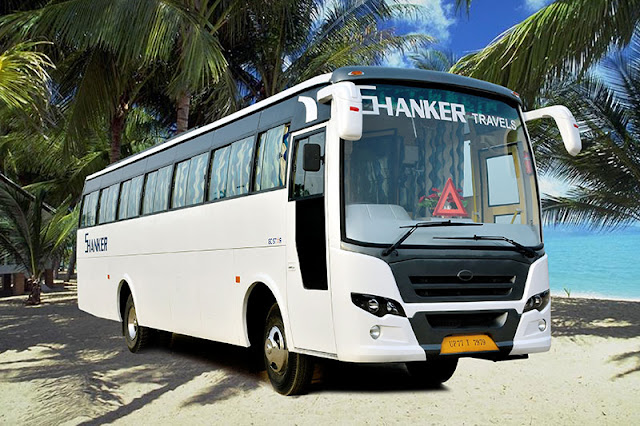 The selection of a right transportation service in Lucknow is a hectic job. However, with some patience and careful inquiry, you can avoid unwanted stress. All you need to do is take some careful steps to follow on hiring the proper bus services in Lucknow.

Shanker Travels brings to you valuable suggestions for hiring and booking the best bus service in Lucknow. Here are some ways you can cross-check your transport service provider.


Book your trip with Shanker Travels and rest assured that all your queries will be answered to your satisfaction. Discuss your questions and inquiries with our representatives and enjoy the transparent and professional approach that we follow. Our drivers are well-trained and dependable. Let Shanker Travels make your trips and holidays more special with bus booking in Lucknow.
Posted by Shanker Travels at 21:45 3 comments:

Thank you everyone for the likes & support.
https://www.facebook.com/ShankerTravelsKANPUR

You can do that by providing them with enjoyable Bus Services in Lucknow. It would make things easy both for you and your guests. Check out the reasons.

Hassle-free
Organizing travel for your wedding guests ensures that they arrive safe and comfortable to attend the most special day of your life. The far-away guests, especially, can incur the expense and fatigue from flights, taxis and hotels and might be too tired and weary to enjoy the day to the fullest. You can lend your helping hand here by arranging Volvo bus services in Lucknow and provide them convenient transportation from airport or hotel.

Time Saver and Budget Friendly
Providing bus transportation for your guests would ensure that your relative, friends and other guests arrive together on time to make your wedding complete and successful. Also, when there is limited parking option at the venue or expensive parking costs, nothing gets better with a wedding bus service.

Safe Transportation
Indian Wedding calls for unlimited enjoyment and party and it’s no exception on your big day. You never know how many cocktails your guests end up enjoying, but at the same time, you have to make sure they reach their home in a safe condition. An arranged bus transportation system guarantees that you and your guests can enjoy the wedding without any compromise.

Added Luxury and Convenience
Special days like wedding doesn’t come every day; therefore, make the most of the day’s impression by opting luxury bus for wedding to offer convenient travel for your guests with added luxury.

Choose From Following Range of Vehicles

56 Seats Coach
This coach is ideal for long distance travels. Shanker Travels is one such Transportation Service in Lucknow which provides 56 seats coach for a relaxed, enjoyable ride made for long journeys. Salient Features of Shanker Travels 56 Seats, Luxury Coach:- 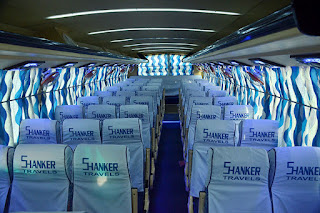 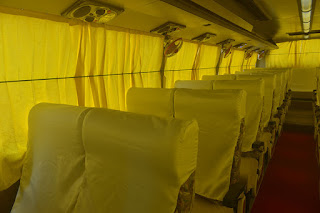 10 Best Places to Visit in Uttar Pradesh by Bus

Uttar Pradesh, popularly hailed as the ‘Heartland of India’, is adorned with a rich cultural heritage. It houses riches that serve as a feast to the wanderlust nature. Whether historical or natural, Uttar Pradesh is a delight to the hungry explorers and houses ample treasures including some of the finest ma-made wonders. Apart from the majestic yet humble flow of the river Ganges and Yamuna, and the signature beauty of Taj Mahal and Fatehpur Sikri, the place of artistic and historic excellence, Uttar Pradesh has much to offer. Check out the top ten places of Uttar Pradesh you can’t miss.

The abode of beautiful Taj, Agra is internationally famous for being one of the heritage hot spots. Sheltering on the bank of River Yamuna, Agra reflects the marvellous architecture of the Mughal period. The flawless architectural grandeurs such as mausoleums, palaces, forts, mosques, and tombs stand proud and compliment this beautiful land of Agra. This creative ground of Agra was a favourite amongst the then rulers of Akbar, Shah Jahan and the Lodi rulers and till today it carries on the tradition through its popular tourism.

Some of the architectural wonders one must visit area:

Popularly known as ‘Krishnabhoomi’, the land of Mathura is one of the most travelled destinations of Uttar Pradesh. Being known as the legendary birthplace of Shri Krishna, Mathura is considered a sacred place to visit and is also a popular pilgrimage. The town near Vrindavan houses many temples with the sacred River Yamuna flowing by. The river houses some 25 ghats, brimming with devotees at sunset and dawn. It was also a popular Buddhist centre previously and sheltered countless monasteries and monks. All of that is now covered in ruins. 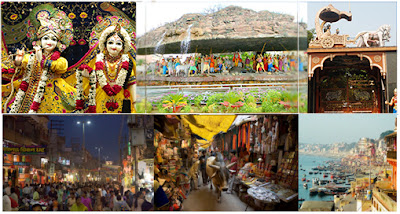 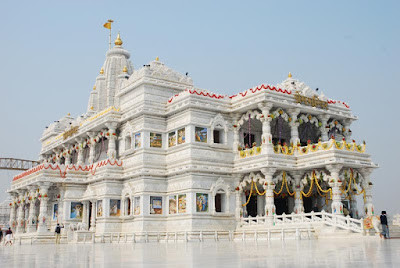 The town of Vrindavan is of great religious importance where Lord Krishna was born according to the legendary story. The place holds an immensely important place in the hearts of the Hindu devotees and thus, is teemed with modern and old temples each bearing their own stories and mysteries.

One of the oldest cities in the world, Varanasi sits on the bank Ganges and is famous for its ghats and winding lanes teeming with temples of all shapes and sizes. Home of Shiva devotees and weirdly dressed sadhus, Varanasi is a must visit destination in UP. 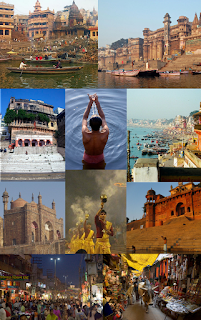 A gem of Uttar Pradesh, Sarnath is a significant tourist destination. Known to be the place where Buddha first preached his sermon, Sarnath was glorified by ruler Ashoka who established a chain of monasteries and stupas here. Located along the Varanasi city, Sarnath eventually became a popular Buddhist pilgrimage. 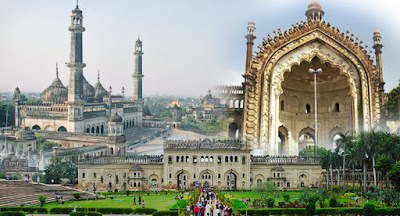 The Eight Best Locations for a Destination Wedding on a Budget

It is rightly said that marriages are made in heaven and with adequate planning, preparation and professional help you can celebrate the auspicious occasion of your marriage on a picture perfect location. It could be anywhere in the hills, palace or beach.

Enlisted below are some of India’s best locations for destination weddings. 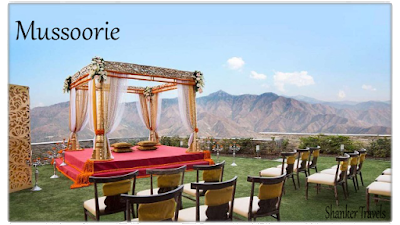 The “Queen of the Hills” Mussoorie provides an idyllic wedding spot, amidst luxurious greenery, wonderful waterfalls and picturesque pines to tie-the-knot.

A medley of green, glory and sluggish, shimmering backwatersprove to be a perfect backdrop for a dream wedding.

The crock-pot of Portuguese and Indian cultures and an eclectic mix of sea, sand, sun and seafood offer an exquisite backdrop for a perfect wedding event.

The heritage city, Lucknowbrags of its meticulously crafted monuments, manicured gardens, rich culture and scrumptious Nawabi cuisines, which makes it an ideal location for a destination wedding. There are many transport service providers that offer Bus Hire for Wedding in Lucknow. If destination wedding is in Lucknow and guests have to travel to Lucknow from Kanpur, choose the luxury bus on hire in Lucknow for a pleasurable and comfortable journey.

The sun-soaked, pristine beaches and plush resorts dotting the island offer a romantic spot for the perfect destination wedding. 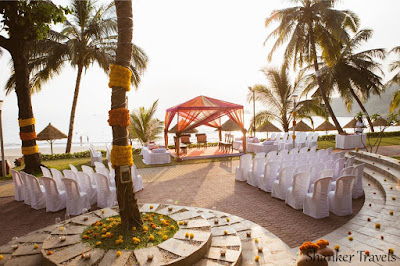 This idyllic setting tucked away in the lap of nature provides an exclusive destination for a grand wedding.

Begin a new chapter of your life amidst the snow-clad mountains, rugged valleys and picturesque panoramas which is so alluring and refreshing for a wedding venue.

Haven to one of the richest Gods and is a sacred and popular place to tie-the-knot.
Thus, a destination wedding can be carried out within a budget. There are many transport service providers for Bus Hire for weddings. ShankerTravels is an eminent transport service provider offering top-notch quality luxury buses, tempo travellers and cars for hire in Lucknow. They offer all kinds of transport services like buses, tempo travellers, caravans, cars including Volvo Bus Services in Lucknow. Choose from their fleet of upgraded, aesthetically designed luxury coaches for a relaxed, safe and joyous journey.